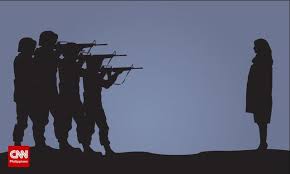 Please read this attachment by Craig Murray. Who is a committed human rights campaigner and was once the British governments Ambassador in Uzbekistan. He sacrificed a very promising career in the Foreign Service because of his concerns at the British governments’ attitude to torture, it clearly outlines the British Government complicity in torture as a means of gaining intelligence. Please note the word intelligence, which in this context means information and should not be confused with evidence, because information gained in this way cannot be used as evidence. Therefore, as Craig explains, the information gained in this manner is used to kidnap, torture and indeed murder otherwise innocent people.
https://www.craigmurray.org.uk/archives/2009/03/fco_finally_adm/

Now this is especially relevant in connection with debates I have been having recently with friends on the other side of the Atlantic who are supporters of Donald Trump. The issues here as regards to international law and UN charters are exactly the same, whether in Britain or the US.

So we have a man who aspires to be potentially the most powerful person on the planet, stating quite openly that he will start of by being in contravention of both international and UN law and not just in relation to torture but also by way of his advocacy of the extra judicial slaughter of innocent members of suspected terrorist’s families. The suspicion, mind you, more than likely gained through torture.

Now not only should this Man be debarred from running for President but he should be taken into custody for inciting murder and any one even remotely thinking of voting for him should hang their head in shame.

For those of you who are still thinking of considering this distasteful person as president of the most powerful country in the World, I have a question for you. Now if this Man’s policy of killing the family’s suspected terrorists is implemented. It means that your armed forces will be required to carry out this heinous task. So my question is this. Should your soldiers have an option of opting out of being a war criminal by refusing to carry out cold blooded murder, or do you think that by being a member of the armed forces of the US,  they have a virtual duty to carry out murder?

Do you think that this extra judicial killing should be done in an attempted humane way, by say lethal injection or do you think they should be simply shot or blown up?