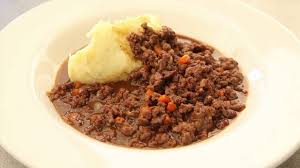 I have just been made aware of the heated controversy which has been created in Dundee, by agents of the Tully( better known in the ferry and the west end as the Evening telegraph) sneaking  into Mennies during my absents whilst on duties overseas. These desperados had the audacity to hold a straw poll on the proper terminology to be used when describing the  local delicacy of Tattie’s N Mince trying to obscure the truth by way of fake news by eliciting the views of unsuspecting and inebriated locals and convincing them of the mistaken belief that the proper terminology should be Mince N Tattie’s.
They further had the audacity  to publish highly inaccurate poll figures in a blatant attempt to obscure the truth. This is of course an attempt by DC Thomson to cause dissent and concern among the good people of Dundee.
Now for the benefit of the less well educated Tattie’s N Mince translates as Potatoes and Mince. Potatoes being tubers which are grown extensively in Scotland and which at one time were collected by school children (of which I was one) in forced labour during what was ( for some strange reason) called the Tattie holidays, for which we were paid a pittance and had to make the difference up by surreptitiously filling a bag with potatoes and taking it home each night. Whereby our Mothers, once we had handed over both the Tatties and the days wages would provide us with this local delicacy of Tatties N Mince. The mince being chopped beef from Aberdeen Angus cows.

Now just to clear up this miss-understanding regarding the terminology which should be used in describing this local delicacy. It is all to do with quantity and availability., Now at one time potatoes were the staple diet in Scotland ,just like Ireland. this is where we get Potato soup and potato and leek soup ( note the highest quantity comes first, you wouldn’t call it water and potato soup now would you)) or simply just potatoes with possibly some onion to give flavour  ( mostly stolen from onion Jonnys bikes when they were at peoples doors up a Closie delivering onions) and that is where the Mince comes in , as the mince content was  absolute luxury and normally rationed very carefully, unless ones father had heisted a bookies runner earlier in the day and found himself in funds to hand over to the boss for the weeks rations.

So there it is quite clearly an attempt by the Tully ( evening telegraph) to spread unrest in the good City of Dundee. and I have noticed a demographic forming with the lower orders of Dundee society mainly based in places like Fintry favouring the Mince first version whereas the better class version with people brought up in the classier parts of town such as Kirkton ,choosing Tatties first.
This unrest  concerned me greatly and realising this could lead to trouble, I decided to resolve the matter before any civil unrest, or worse still , uncivil unrest ensued, I decided to contact my good friend Donald Trump as you know how good he is at solving problems. I have a hot line to him which he keeps next to the big red button only ever an arm length from him. I always hope he will press the right button any time I give him a bell.

This was the conversation:-  Hallo Donald I hope you are well and I hope I have not disturbed your round of golf again.

Hi Bob , always good to hear from you and yes I am on the course but I have all my people with me and you know I have all the best people.

Yes Donald I do know you have all the best people, tell Sarah I was asking for her and hope she is remembering to take her medication and keep smiling, and John also and I hope he is better rested and  not having to to  count too many dead bodies to get to sleep at nights

Yes Bob I will pass on your regards , now what can I do for you as you know I always do what I can for my friends especially ones from my Mothers  great country, England. And tell Alex I was asking for him and that I have forgiven him for stuffing me in regards to the wind farm he allowed beside my beautiful golf course at Mennie and also pass on my regards to the Royal and ancient who removed the Open from my beautiful golf course at Turnbury because I was discriminating against all these nasty terrorists.

Yes Donald I will pass on your regards and by the way your Mother came from Scotland which is not part of England. Right, well the reason I phoned you was that we here in Dundee have a problem and I hoped you could help.

Yes of course ,anything for one of my staunchest supporters Bob you know ,every body loves me and I am always glad to be of assistance.

Well Donald we have this problem in Dundee regarding the terminology of a local delicacy, Tatties N Mince as some subversives are insisting on calling it Mince and Tatties., The problem we have here is that this could be the thin end of the wedge and we could end up calling ourselves  Thamson  Jock’s Bairns if this is not corrected.

Ok Bob I have my people on to this and they are telling me that Australia is a big place but they have found Dundee.,

No Donald, not Dundee Australia , Dundee Scotland. They have been watching Crocodile Dundee to often. Are these the same people who told George Bush that Iraq had weapons of mass destruction., I have told you before to keep an eye on them.

Ok , they have found it Bob and I have a satellite homing in on you right now, you know I have the best people.

Yes I know Donald now what I would like you to do, is adjudicate on this matter and put these subversives right.

Ok Bob I am on it and John Bolton is here by my side.

Ok John has come up with a plan, I think we should nuke them.

Em, well perhaps we should keep that one up our sleeve Donald, in case the situation deteriorates although we might just have to take out Fintry as a warning , you guys have a track record there  and  we could always use the threat of course.

Ok John is looking at  another plan we could get some big guys in there and the CIA have all these peoples addresses  so we could give you the addresses and you guys could paint their doorposts with goats blood then we could get the yes bus and round up all their first born and take them to Broughty Castle where we could set up another Guantanamo Bay I have a few thousand orange boiler suits on the way to you.

Ok Donald perhaps you could just issue a presidential proclamation, and if these people see boiler suits arriving they will think someone has a job for them , I think that will do the trick , these Fintryites will agree to anything other than work, brilliant, I knew I could depend on you, as you say, you have all the best people. Next time you are over here I will treat you to a plate of Tatties n Mince and take you to Mennies for a pint.

So problem solved and henceforth the proper term under presidential proclamation will be  TATTIE’S N MINCE, you got that?