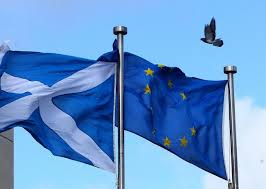 Well an interesting speech today from Nicola where she laid out plans to introduce a “draft” bill on a referendum to parliament. Not exactly a new initiative as it was first mentioned at the opening of Parliament a few weeks ago.

Firstly, I can’t understand why the term “draft bill” is being used because, if I understand the bill passage procedure properly, the draft stage is simply one of the steps along the road and not in itself completed step unless the intention is the halt the procedure at that stage, which would seem strange to me.

Anyway, any steps towards a future referendum is to be welcomed. However, it would have been nice to see an announcement regarding addressing the issues we lost the last referendum on as any future referendum will be hopeless without a reasonable time to get people convinced of the inaccuracies that were being put about by project fear with regards to pensions and monetary union.

Now regarding the bill to be published, one of the steps is that any interested parties can object and in fact mount a legal challenge and this is bound to happen because one of the people who can mount such a challenge is the Scottish secretary and the grounds on which that legal challenge will no doubt happen is that a referendum is a reserved matter.

A way of subverting this would have been to have included the intention to wrest control of calling and arranging referendums from Westminster to the Scottish parliament, in either the Westminster general election in 2015 or the Scottish elections last May.

I and others have been warning about this for quite some time and indeed I went into some detail in my blog “letter to Nicola” written a few days before the Scottish elections in May. At the very least it would have given the SNP a focused mandate for a referendum bill, which they do not have at the moment and this will be made very plain by Westminster in coming weeks.

The thing which most concerns me most is that when you analyse Nicolas speech today It gives me the uncomfortable impression that she is intent on doing everything to keep us in the UK and indeed giving the British Government every possible way out to prevent Scotland becoming independent. Now I know there is the argument that The SNP are governing for the whole of Scotland and not just for yes voters but I would put it to you that this does not necessarily mean giving up prime opportunities to go for independence and here is my reasoning.

Nicola Sturgeon is the leader of the SNP and the sole purpose of the SNP is to gain independence for Scotland. Now she is also the first minister of Scotland because she is the leader of the party (the SNP) who are the largest party in the Scottish parliament which by the way has a pro independence majority. Now I think it is fair to say that there is no one who voted for the SNP and therefore made them the largest party in the parliament (last time they had an overall majority before they messed it up this time )  Therefore they have a mandate to strive towards independence so therefore there is no need to sacrifice golden opportunities ( which they have done constantly over the last two years) in the spurious interest of governing for all the people, because that will always be impossible to do and they should instead concentrate on governing according to the mandate they have been given by the Scottish people and that is to achieve independence.

There is no doubt that the most advantages set of circumstances for going for another referendum which will ever likely present themselves was present the day after the EU referendum result and that was missed because Theresa May hotfooted it up to Scotland and persuaded Nicola that she had some sort of veto over EU negotiations.

No more carrots Nicola, please just get on with the job you have been given by the Scottish people.