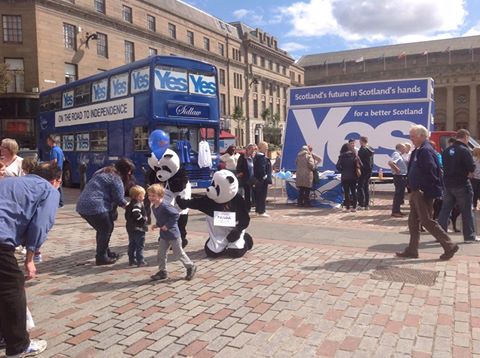 I was looking at some photos of Alex Salmond in Dundee city square earlier promoting the new party Alba, which are beginning to show some really good polling results.

His policy of attaining a super majority and therefore immediately commencing independence negotiations with the UK government, is beginning to find a lot of credibility with SNP voters. They are finally beginning to realise that the SNP mantra of both the constituency and regional vote for them is completely false and misleading as recent polling has shown.

By pure coincidence I opened Facebook and in my memories was this posting, which I copy below. It was a posting I made on the 27April 2017, exactly four years ago to the day, with the 2017 general election about to happen.

Now it was by far, not the first time I had criticised the SNP for their inaction regarding independence but what was topical about it ( apart from coming up for an election) was that I was advocating exactly the policy that Alex Salmond is advocating today, and that is in the event of a majority of independence supporting parties we simply begin independence negotiations with Westminster.

Over the last six and a half years under the leadership of Nicola Sturgeon, the cause of independence has gone backwards. This gives an idea of my thoughts during this awful period in Scotland’s history.

By the way, there must have been a large amount of people agreeing with me at the time because in the election over half a million SNP voters stayed at home compared to the election in 2015.

OK so once again the SNP are running scared of mention of the word independence in connection with an election. This is really becoming tiresome. So just in case there is any SNP politicians or, for that matter members of the SNP political party not actually aware of their reason to exist, then I copy the second chapter of the SNP constitution here.

2. The aims of the Party shall be:

(a) Independence for Scotland; that is the restoration of Scottish national sovereignty by restoration of full powers to the Scottish Parliament, so that its authority is limited only by the sovereign power of the Scottish People to bind it with a written constitution and by such agreements as it may freely enter into with other nations or states or international organisations for the purpose of furthering international cooperation, world peace and the protection of the environment.

OK so is there anything about that statement that any one does not understand?

Fine so why is it that every time we get near an election there is concern as to whether there will be any mention of independence in the Manifesto.

Here is a few facts to think about .
In the manifesto for the 2011 Scottish parliamentary election there was a definite intention to hold a referendum and the SNP were given a previously thought impossible overall majority in the Scottish parliament . The increase in their vote over the previous election was in the region of 12.75%

As a result of this they progressed to a referendum campaign and at that time independence was standing at 27% in the opinion polls.

During the referendum campaign we pushed that 27% to %45%.

In last years Scottish elections there was scant mention of independence and certainly no commitment to go for another referendum. The result of that election was that the SNP lost 6 seats and their increase in voters was 1.5% and that was with the inclusion of young voters that had not been possible in the previous election. There was also a doubling of Tory representation at Holyrood

I believe this was the point where the SNP made one of their most fundamental  tactical errors because they decided that they would set aside their reason to exist and put independence on a back burner. The reasoning behind this was that they felt that they should be seen to be governing for everyone and not just independence supporters.
Firstly that is impossible, you cant govern for everyone . You can consider everyone but you cant govern for everyone. A political party governs as per its manifesto and according to that parties constitution. It is as simple as that and as you can see above the parties constitution quite clearly makes it the party of independence.

Now the SNP had a historically significant mandate from the people of Scotland through the previous Scottish elections , an increase from 27% to 45% in the referendum campaign, an  unheard of increase in membership from around 15.000 to 110,000 and opinion polls indicating that they were on course for a wipe out of Labour and an unheard of return of MP’s to Westminster. So what did they do ?  they ignored all of these indicators and put their reason to exist to one side and they actively discouraged any mention of independence during the Westminster campaign.

Here in Dundee , the City that returned the largest percentage of yes votes they actively discouraged any expression of independence. I was involved in agreeing to supply the Yes Bus for an  independence rally  in the City Square the weekend before the 2015 general election which was cancelled at the last minute because of representations by the SNP to the organisers to reschedule the event to the week following the General Election. When I took this up with an SNP politician , his very words were ” we cant have Saltires and Yes signs being displayed in the City Square in Dundee the week before a general Election”. Yes ,that was his actual words.

The fact of the matter is that there was not a single person who voted for the SNP in either a Scottish Parliamentary election or a Westminster election who did not understand the whole propose of the SNP and therefore were well aware that their vote could lead to an independent Scotland. Therefore the SNP have ,either by design or simply incompetence, consistently steered away from their propose in life and that is independence, and they are about to do the exact same again with this upcoming General election.

Nicola Sturgeon’s first reaction to the announcement of the general election ( once she had managed to get out of the way of the car whose headlights she had been caught in ) was to announce that this election would give them a mandate for the mandate she had already said she had. A totally incoherent response. Her next  announcement was to make clear that this General Election would not be anything to do with independence , which begs the question ,” what is the propose then of the SNP”.

I have no doubt that the SNP will not take this option and will as usual try to do every thing to convince voters that for this period in the run up to the GE they are not the party of independence.

However, if they are to retain any credibility at all, there is one thing they must include in their manifesto and I have advocated this in both the last Westminster election and last years Scottish parliamentary election.
They must include an intention to wrest control of the ability to hold referendums from Westminster and place this power where it belongs and that is at Holyrood. If they once again fail to do  at least that  then they can no longer call themselves the party of independence.