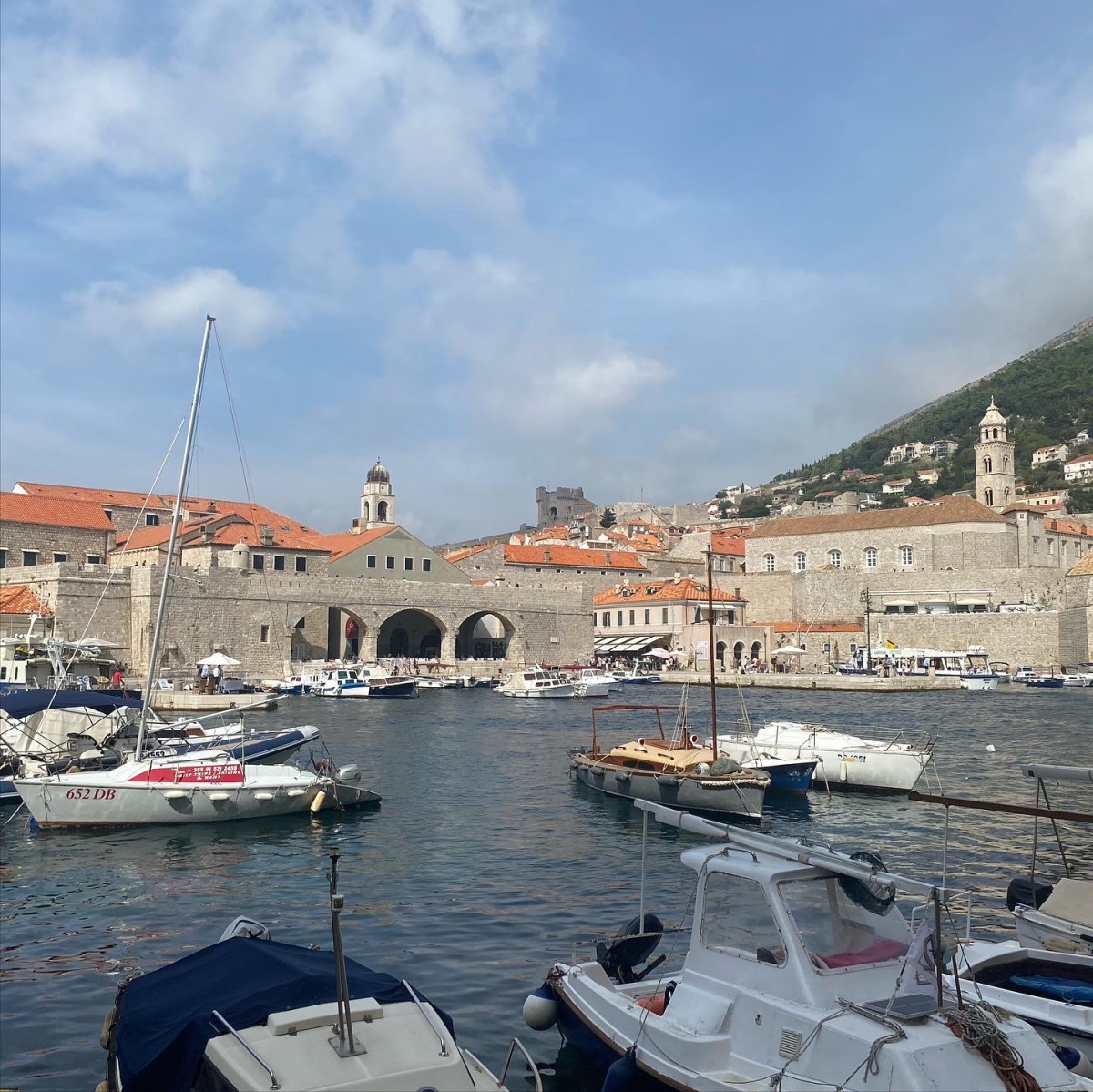 After leaving Malta we sailed in a north easterly direction through the Mediterranean, into the Ionian Sea, turning north and into the Adriatic sea, heading for Dubrovnik in Croatia. We had two nights and a day at sea, docking in Dubrovnik in the early hours of Wednesday morning.

There is an interesting selection of things to do on the ship on sea days, from deck games to table top computerized games such as chess, drafts and of course a excellent program of lectures. On the larger cruise ships lecture programs are generally confined to longer trips such as transatlantic crossings. These voyages are generally very good value for money as the cruise lines have to reposition according to seasonality, such as Summer in the Med and winter in the Caribbean. Mind you, crossing the Atlantic in say November or March does have its challenges as the weather can be changeable.

Coincidently, a memory came up on my Facebook today from 2017 concerning a transatlantic I did with Princess . We were to dock in Boston and then Newport, before finally landing in New York. Unfortunately a hurricane by the name of Jose had other ideas and the captain announced that we would have to divert south to attempt to skirt the edge of the hurricane . Jose of course had a mind of its own and decided to, itself change course, so over the next few days we changed course several times in an effort to miss the worst of the storm. This meant that we had to miss out Boston and Newport and we had a pretty rough few days into the bargain. We actually arrived in New York a day early at the end of an exciting trip.

So, after a very calm sail through the Med, Ionian Sea and the Adriatic we arrived in Dubrovnik, Croatia , Now Croatia in general is a very beautiful country and in particular the cities on the Dalmatian coast are spectacular. However within recent history Croatia was involved in a viscous war in what is still called the Homeland wars or in particular, and as far as it affected Croatia, the war of Serbian aggression or more commonly the war of Croatian independence, because that is exactly what it was.

I wont bore you by trying to go into detail of this and the other wars in the area at that time, but suffice it to say that as far as Croatia was concerned the war lasted ( all be it sometimes sporadically ) from 1991 to 1995 and basically it concerned the countries within the Yugoslavian federation and as far as it concerned Croatia it was between them and Serbia. There was if course a large Serbian population in Croatia who did not abide by the referendum which was held to ascertain the will of the people, in fact the Serbs in the main, boycotted the referendum.

However, the referendum was held and it returned a 95% majority for indepoendence. The war started as a civil war between the two factions Croats and Serbs with Serbia heavily supporting the Croatian Serbs. Croatia had no actual Army at this point and the early fighting fell to the police. The photo above is of their first “battle ship,” so you can imagine what sort of navy they had.

Eventually, they did managed to get an army together and they prevailed over Serbia, but it was a long and bloody war with around 15,000 Croatian armed forces losses and 6,000 civilians. Serb forces withdrew from Croatia in 1992 but the war spilled over into Bosnia with the Croats supporting the Bosnians against the Serbs. Eventually the war ended in 1995.

Just a thought here . The Croatian situation in 1991 just before the war has parallels here in Scotland. They had a large independence movement who wanted independence from a union, Yugoslavia. They had a large Serb population. The Serbs had a disproportionate hand in the governance of the country and the Serbs had more or less control of the armed forces. Croatia had more or less all of the coastal areas of the Yugoslav federation therefore controlling a main source of income through the ports.
Could it happen in Scotland?

The old town of Dubrovnik takes your breath away . History exudes from the sandstone ramparts to the beautiful churches. Most of the fortifications date from the 16th century and it was here in Dubrovnik that much of the series Game of Thrones was filmed.
It was hot as I wandered through the smooth polished sandstone streets , thankfully traffic free. I found a café to sit and watch the world go by. Prices in Croatia are in the region of half that in the UK.
Dubrovnik was one of the towns laid siege to during the homeland wars and the old town was hit by over 600 artillery rounds, now all carefully repaired.

After a peaceful and interesting walk around the old city of Dubrovnik I headed back to the shuttle bus and back to the ship and a rather quieter evening on the Viking Venus than I perhaps would have had on some of the larger ships.

Viking caters more to the quieter more sophisticated cruiser with all activities and bars closing by midnight, whereas on most of the other ships I have been on, midnight would have been about the time to visit the disco. Unfortunately because of Covid restrictions there is no dancing on the ship, which I miss.

As the sun started to set we slipped out of the harbour into the Adriatic sea and headed north up the Dalmatian coast towards Split.