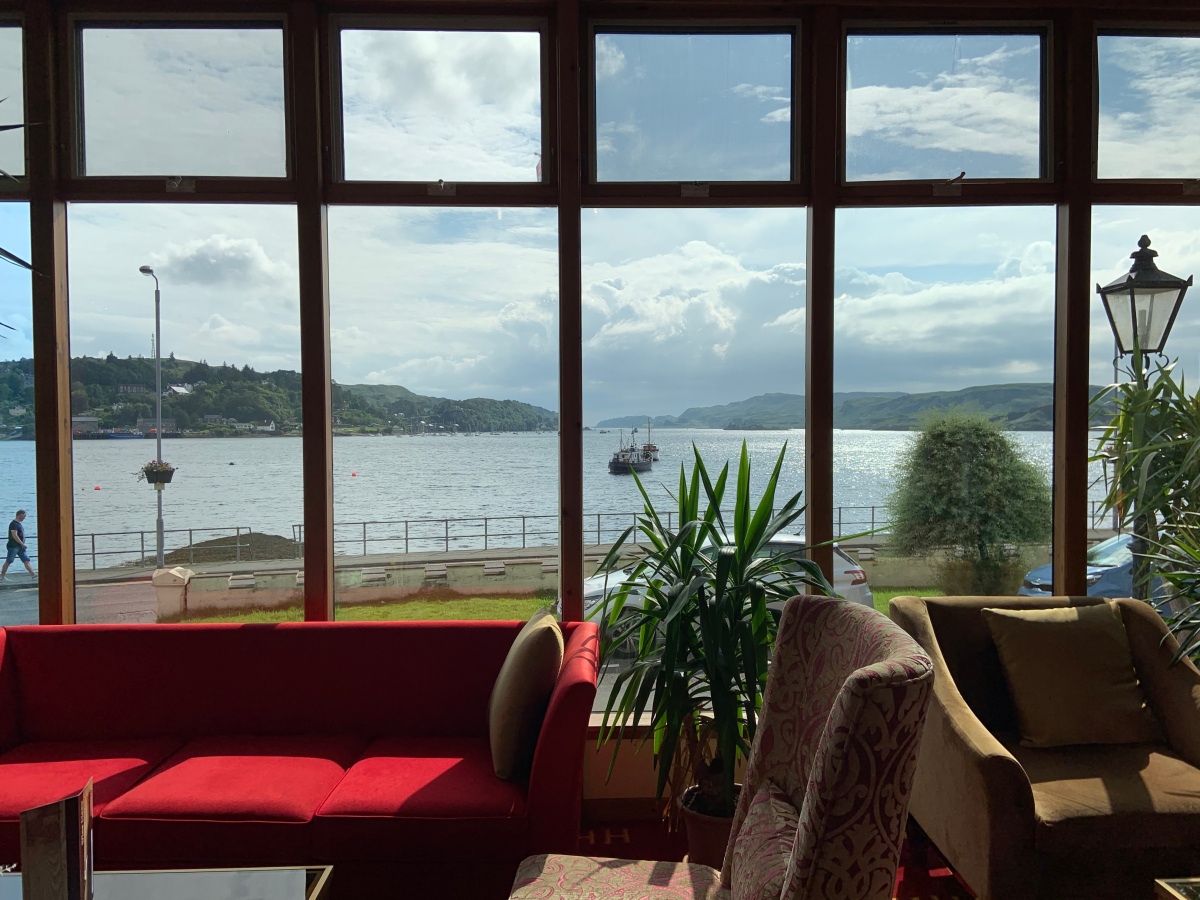 After the blistering hot day yesterday I woke up to the pitter patter of raindrops on my window and it went from there to a deluge. Oh well ,it is Scotland. So down for breakfast and then on my way again, heading South this time and retracing some of my trip yesterday as far as Newtonmore before turning West towards Fort William . A long drive ahead ,but I was intending stopping off at various points as I progressed towards my destination for the day which was Oban. The rain was coming and going with some quite bright and warm spells as I made my way along the banks of Loch Lagan. Looking towards the far bank I passed the estate that Queen Victoria considered as her home in Scotland before deciding on Balmoral

I stopped at Lagan Dam which is part of quite an interesting project, as it collects water to turn the turbines in the Aluminum smelter in Fort William, some 20 miles away . The water collected at Lagan dam feeds a smaller loch in the hills towards Fort William then goes through a i5 mile tunnel to the smelter which is sited on the side of Ben Nevis where it turns turbines to produce the high volumes of electricity required in the smelting process.

So after a brief stop at the dam I continued heading west, passing through Roy bridge and Spean Bridge. Near Spean bridge is a memorial set up after the second World War to the Marine Commandoes who trained near there at Auchnacarie . In recent years there has appeared a small garden of remembrance to members of special forces who have lost their life’s in recent conflicts like Afghanistan and Iraq. So onwards West, passing The great Glen Cattle Ranch! yes a ranch in Scotland, at one time owned by an American guy who had his herdsmen rounding up the cattle on horseback.

On the edge of Fort William I turned of towards Corpach which marks the start of the Caledonian Canal and another mention of that great Scottish engineer Thomas Tedford, as he was responsible for the building of the canal which involved some pretty innovative engineering to accommodate the different levels required along the length of the canal as it made its way up the Great Glen , a natural geological rift stretching from Fort William all the way to inverness . This involved what is called Neptune’s Staircase , a series of locks to raise and lower the water level at both Corpach and Fort Augustus. Telford cleverly used the series of lochs which stretch the length of the Glen, only building the canal in the short stretches between them. Telford went down to England eventually and was responsible for building many bridges such as the Meni suspension bridge and he actually had a Town named after him ,Telford.

So onward to Fort William which sits at the head of Loch Linnhy where it meets Loch Eil. Fort William is named after the Duke of Cumberland, the victor of the battle of Culloden in 1746. In England they also named a flower after him and called it Sweet William, in Scotland the flower was named Stinking Willie. The Duke of Cumberland’s atrocities after the Battle of Culloden are well known and that period of Scottish history is a story for another day. The town was previously known as Marybourgh after the wife of William Of Orange. Fort William sits in the shade of the tallest Mountain in the British Isles Ben Nevis and passing through, brought back memories of ” the Ben,” There is a race every year on the first Sunday in September and I ran that race 15 times . It is 12 miles but harder than any Marathon, my best time was 1 Hour 54 Minutes.

Now, I had made up my mind to visit the memorial to James of the glen, which sits high above the bridge. Unfortunately time had been cruel to the steps leading to the monument and indeed to the area surrounding the memorial. However I managed to circumvent the barriers and obstacles put in the way presumably for safety instead of just fixing it.

I don’t know if any of you have read the Robert Lewis Stevenson book Kidnaped, but if you have then this book described what was called the Appin murder. There is a character in the book called Allan Breck Stewart who was a kinsman of James Stewart ( James of the glen). You will remember that David Balfour and Allan became friends and had many adventures whilst traveling through this area of Scotland . Now the man who was killed was Collin Campbell a tax and rent collector for the Campbell ,Duke of Argyle and not a well liked person . One day whilst traveling through Appin he was shot and killed and James Stewart was blamed for his murder. Stevenson alludes to this incident in the book and more or less implies that it was in fact Allan Breck Stewart who did the killing . Now although this book was fiction ,it was based on historical fact and Allan Breck Stewart was an emissary of Bonnie prince Charlie who , after the battle of Culloden had to flee to France along with many other Clan chiefs. It was Allan Breck Stewards job to come back from France and collect dues from the various Clans to keep their exiled Clan Chiefs in the manner they were accustomed to. James was tried in front of a Campbell Judge and a Campbell Jury , found guilty and hanged where the monument now stands and his body was left there for over a year with a guard posted as a warning to any of the Clan who had similar thoughts .

I decided to drive through Appin instead of going through Glen Coe, I bet you are glad ,otherwise I would have had to tell you the story of the massacre of Glen Coe, but that is a story for another day and another journey.

So after the stop and the trek to the monument I continued around the coast by Loch Linnhe and Loch Laich Stopping to take photos of Castle Stalker, which sits on a small island and was featured in Monti Pythons ,”The Holy Grail” It changed hands between the Campbells and the Stewarts over the centuries , once as the result of a drunken bet.

Onward then to Oban, a check into the hotel and a walk to the ferry terminal to pick up my tickets for tomorrows sail to Barra

Sitting in the lounge of the hotel, pint of Guinness and looking forward to setting foot on Barra again.